What do you do when you are in a foreign harbour and COVID takes you by surprise? What does the harbour look like and what are the possibilities? Willem de Graaf’s Trintella IIIa Ros Beyaert is in Alicante. Willem describes how he has gone on several trips despite COVID, and what sort of things he had to consider. Interesting and educational. You can download an printable pdf version here.

In 2014, we sailed our Ros Beyaert from Middelburg to Lagos in the south of Portugal. In the spring of 2016, the journey continued to Almerimar on the Spanish Costa del Sol. After having spent the summer in the Netherlands, as we always do, this fall we sailed further towards the northeast, towards Alicante. This has been our berth since 2016.

On average, we spend around 5 months a year on board. We love to make longer journeys in May/June and September/October. We visited Ibiza, Mallorca, and Menorca in the spring of 2019 and during the fall, we sailed straight to Barcelona and coast-hopped our way home.

We had already made our plans for 2020: boarding in May and sailing to the Baleares and then to the Spanish coast in the fall, but south to Cartagena this time. As a sailor, you know you have to be flexible and that weather conditions can affect your plans. Nobody was prepared for the effects of COVID, though.

The year was off to a great start. A long-cherished dream came true. In February eight of us, family members and sailors, flew to Martinique. In a rented catamaran, we spent 9 days exploring the Caribbean, followed by a week in a beautiful home with a pool in Martinique.

A good friend called us and advise us to stay longer, because COVID was getting completely out of hand back home. It seemed like a good idea to us.

On 16 March, the first day of our extended stay, Macron declared total lockdown for France. Martinique might be on the other side of the Atlantic, but it is French soil still. This means only leaving the house to go to the nearest supermarket and staying indoors the rest of the time.

On 25 March, we were on one of the last flights, a fully booked plane, back to Paris. All flights from Paris to Amsterdam had been cancelled. It was a strange experience to take a cab through the completely locked down and deserted Paris to Gard du Nord. The TGV to Amsterdam was still running and was almost completely empty.

Spain, or maybe not?

All air travel in Europe ground to a halt, borders closing everywhere. Our already booked flight in May to Alicante was cancelled and we rebooked it for 1 September. In the meantime, Ros Beyaert was in the harbour in her winter coat. The new mainsail needed to be stricken and tested, and there were many other things on the to do list.

When Spain was ‘unlocked’ on 1 July, I quickly booked a flight. On my own, though, because Trees was (and is) still unkeen on flying. The plane was almost completely booked, but everyone played by the rules, keeping their distance, and wearing facemasks. 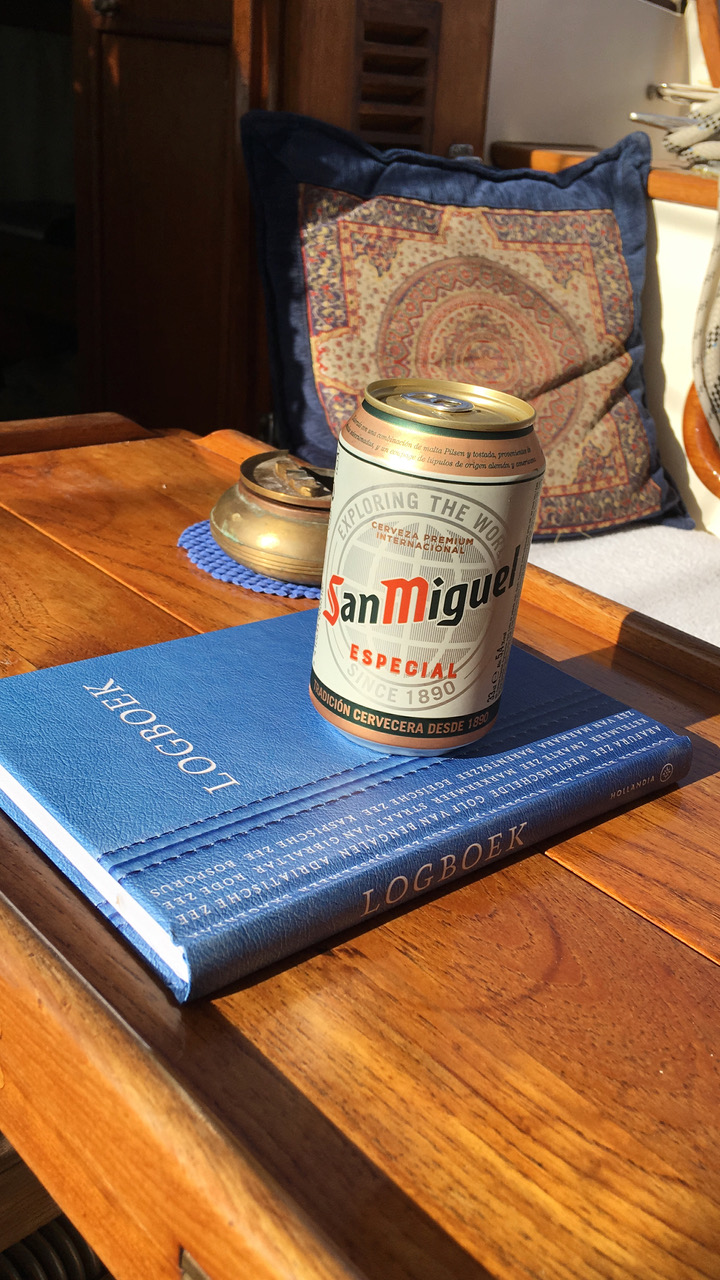 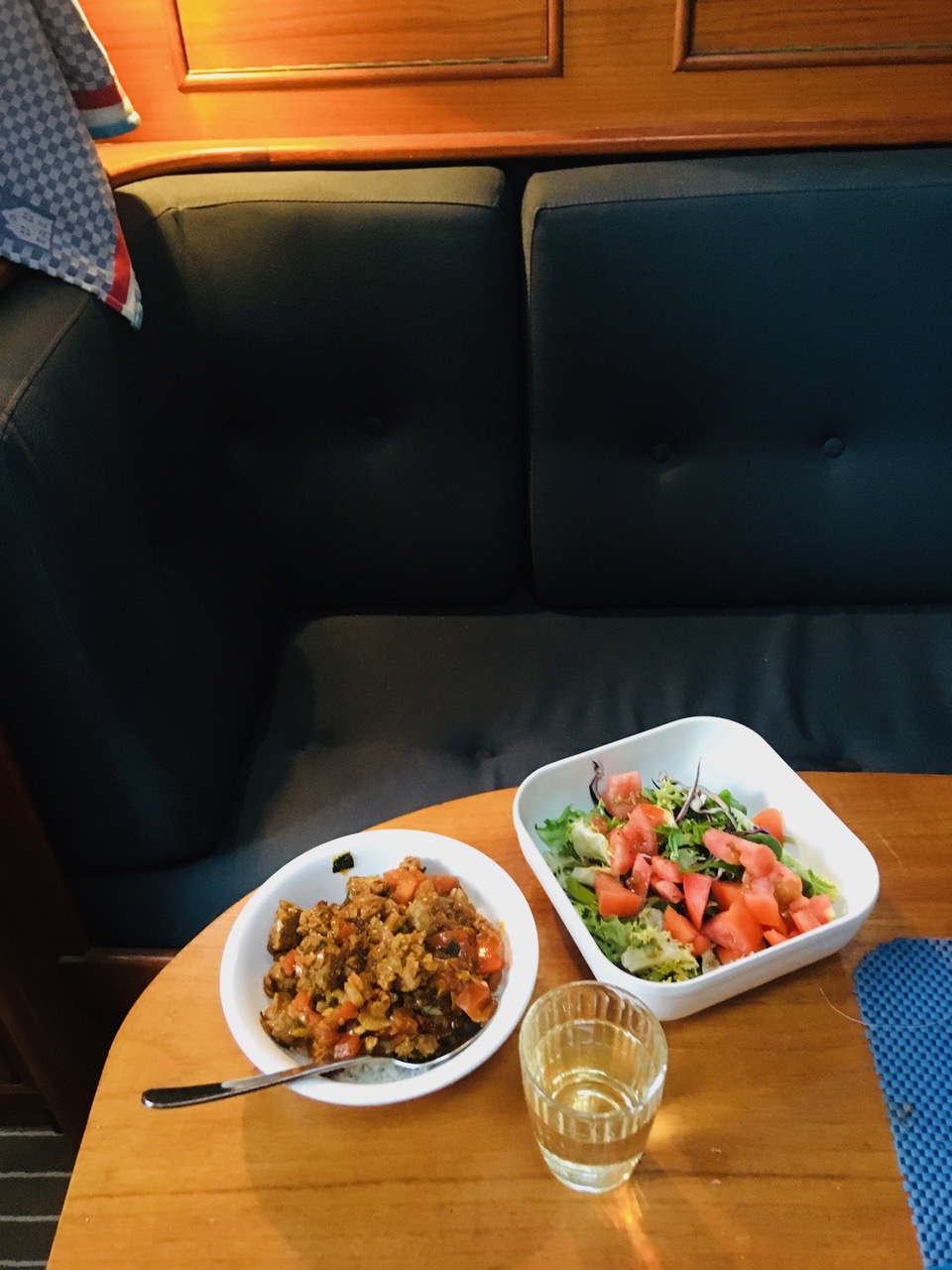 It was quiet in Alicante. Very few, and mainly Spanish, tourists. Everyone, apart from the joggers, wearing facemasks when outside and in shops. Only when sitting at a table with a drink or meal you’re allowed to take it off. The temperature was lovely, you could spend all day outside. I was actually feeling safer in Alicante than I felt walking into a supermarket in Apeldoorn. The 10 days I spent in Alicante were a lovely mixture of chores, a little bit of sailing and dropping anchor and taking a swim. In the crystal-clear waters, I spent a few hours with a mask and putty knife to remove the accretion of 6 months being moored from the Finsulate* antifouling foil. I flew back to the Netherlands halfway through July, with the idea that we would be boarding together by 1 September.

In the week before our flight to Alicante, Spain went from code Orange to code Red, only necessary travel. Somewhat optimistic, I rebooked the flights to 28 December.

The boat, however, was completely ready for sailing back in Alicante. The to do list wasn’t finished (dream big, after all). More than enough reason for me to see the journey as ‘necessary travel’ and fly to Spain for three weeks on 19 September.

What was it like, three weeks of code red in Spain?

The city and harbour were even more quiet than they were in July. Most restaurants were still opened. The discipline to wear facemasks was still strong, possibly enforced by the continuous presence of the Guardia Civil. Sailing is no problem, you are welcomed in all harbours, as long as you don’t have too many people on board. A solo sailor is not an issue anywhere.

The weather forecast predicted 4 days of wind from the south, max. 5 Bft., followed by several days of wind from the north. The do list could wait, it was the ideal weather to go sailing for a week. Boarding on Friday, tanking water and cleaning on Saturday, going to Alicante on Sunday and leaving on Monday. There are several great harbours northeast of Alicante. Javea is, with only 50 miles, close enough and a great harbour to cross to Ibiza. Ibiza wasn’t going to happen this week, so the first stop is Altea, 24 miles from Alicante and an easy start. As often happens in that area, there wasn’t a lot of wind in the mornings, but picks up in the afternoon. So the first hours of the day are spent with the engine on. Close to Benidorm, I could shut off the engine to spend the final two hours sailing to Altea with a backstay wind. It’s common in Spain to call ahead and book a mooring. When sailing into a harbour, you use channel 9 to call the ‘Marinero’. They give you a place and are at the ready to take your stern lines and hand you another rope, attached to a block of concrete behind the boat to ensure you keep the bow away from the jetty.

In Altea, you will see a lot of Dutch people and Belgians. The local supermercado sells a lot of Dutch products, like Conimex nasi spices (seen nowhere else in Spain). Restaurant Sabor, right across from the harbour, is an absolute recommendation, as well as climbing up to the old city. Apart from the small number of tourists and the facemasks, everything was business as usual.

After two nights of Altea, I sailed the 25 miles to Javea with a strong wind. In those three weeks in Spain, it only rained once, and almost every day was sunny and the temperatures often reached 28 degrees. Navigating is easy around there. The visibility is usually great, and waters are deep enough to sail. The amount of wind and its direction can suddenly and unpredictably change, though. When the winds are onshore, your quiet anchorage can quickly become a rough sea with steep waves. But a harbour is never far away. 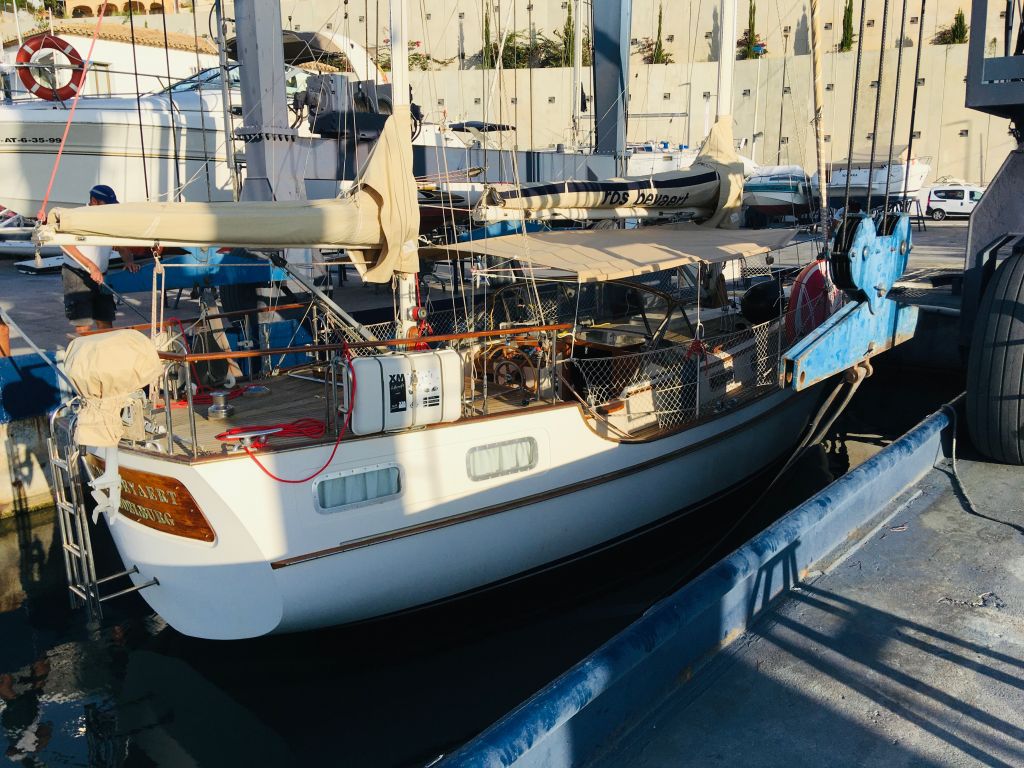 Because there was quite a bit of accretion on the ship, I put Ros Beyaert on the shore on Wednesday and pressure washed it off. We were back in the water within an hour.

Javea is a nice town with lovely restaurants on a boulevard. The wind came from the north and it was a great moment to return to Alicante. Left on Friday morning and with a strong wind and 6 knots I sailed towards Cabo de Nao and Calpe. Calpe is on a headland, ending in the Penón de Ifach, a 332-meter-high rock that rises straight from the sea. If you have a good pair of hiking shoes, it is a good climb, the effort easily rewarded by the sublime view on harbour, city, and hinterland. 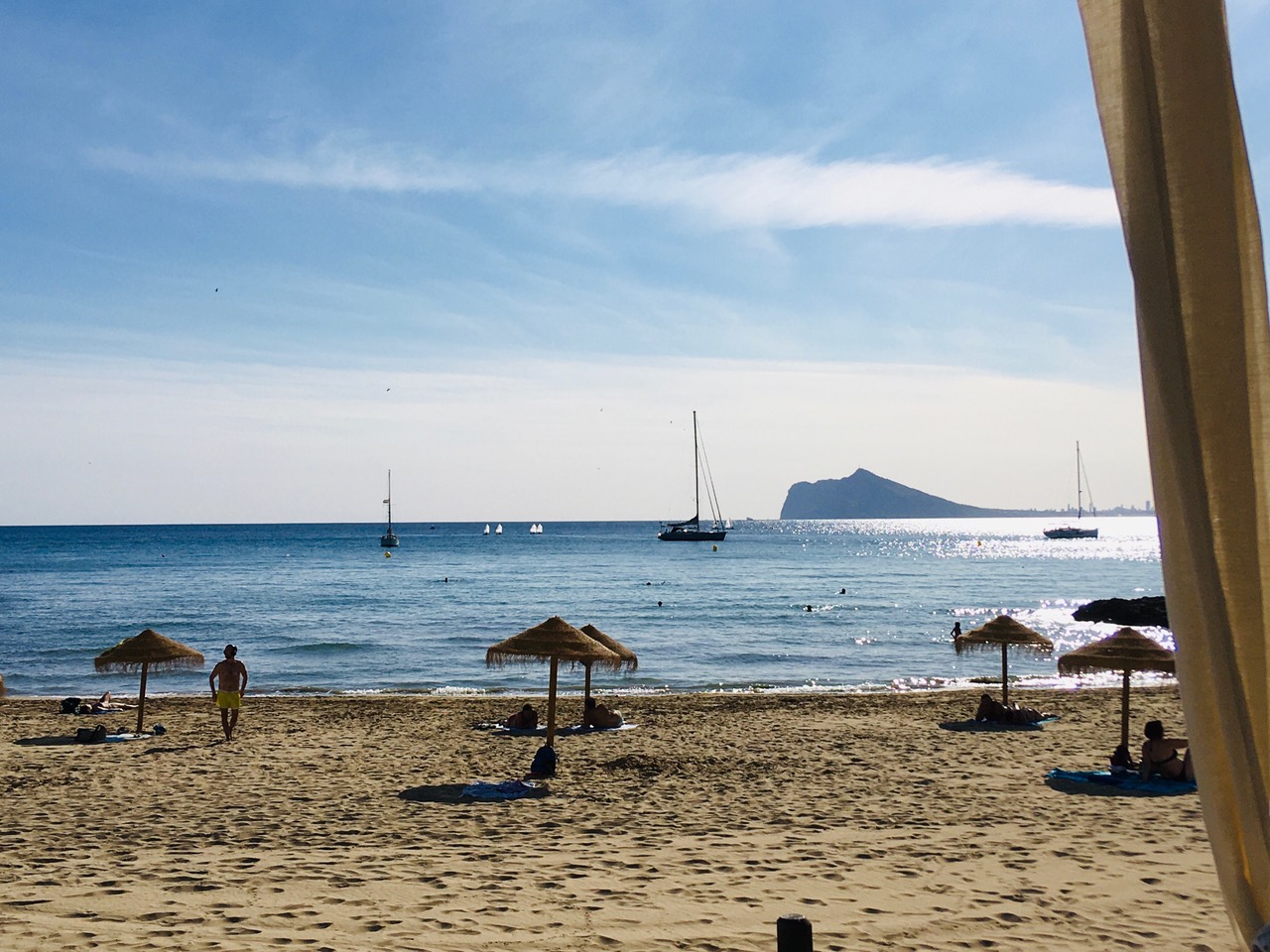 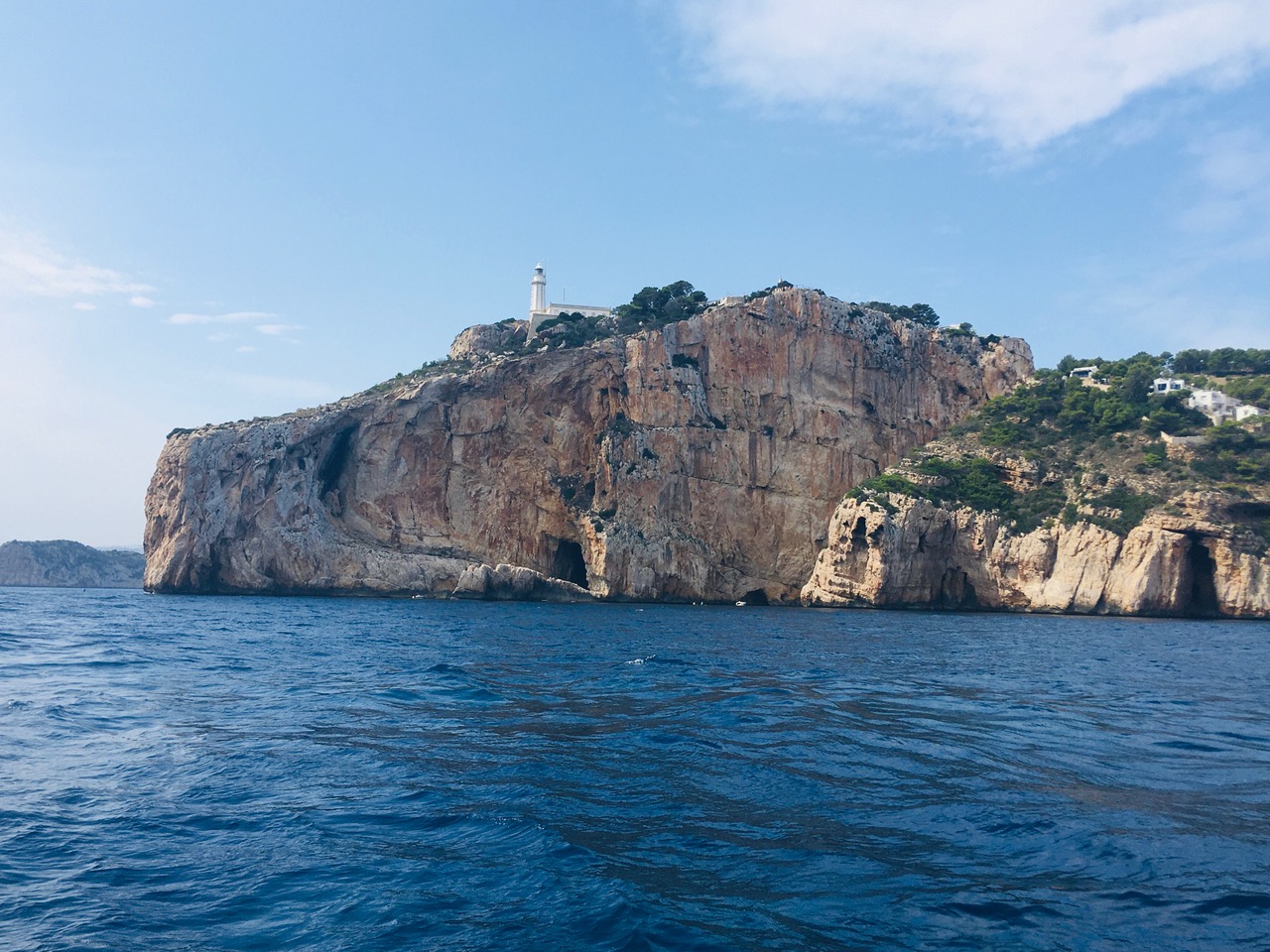 Because the port fees in Spain are rather high in September, around €40,00 a night, I decided to moor outside. You are secluded if there’s a north wind. I thought blowing up the spare boat was too much effort, and the sub board was already ready, so I took a waterproof bag with wallet, sunglasses and dry clothes and paddled to the shore.

Sitting on a terrace with a cold beer, I struck up a conversation with a nice Belgian couple that had been working and living in Calpe for a year. As a solo sailor, it’s nice to agree you will pick them up the next morning at 10.00 and have them join you towards Alicante for a day. After a nice dinner in one of the many restaurants it was back to the boat by sub board. I was happy that I had turned on the anchor light before I left.

With a cooler of Cava and lots of tapas, the couple was ready at exactly 10.00 and with a soft breeze we motor sailed close to the coast of the now quiet Benidorm. Because we wouldn’t be reaching Alicante until rather late, I dropped them off in Villajoyosa. Even then, you are expected to call in with channel 9, but then there are two people ready to help the passengers ashore. Lovely and unexpected meetings!

The wind picked up, and I could sail from Villajoyosa to Alicante. Ros Beyaert was back in the box by 18.00. In Alicante, the harbour has side jetties and it’s easy to moor in your regular box, even by yourself. We don’t need to bother the marineros in our own port.

The other two weeks I spent working on the boat, interchanged with a few days of anchoring, swimming, and supping.

During the final week, I spent a quiet day sailing to the picturesque Isla de Tabarca. The island is 12 miles south of Alicante and a few miles from Santa Pola. It’s 1800 meters long and no more than 400 meter wide. It used to be an infamous pirate’s nest, but now it’s inhabited by 59 peace loving people. During the day, you can ferry there from Santa Pola or Alicante. By the end of the day, it’s quiet there, with the exception of a few hotel guests.

Again, I took the sub board to shore. It was nearly desolate. I could score a beer, yet everything but one restaurant was closed. COVID had never been so visible to me in Spain. The plan to spend the night there was quickly discarded. I raised the anchor it 17.00 and was back in Alicante at 20.00. I was happy that Plaza 6 had a table outside for me. 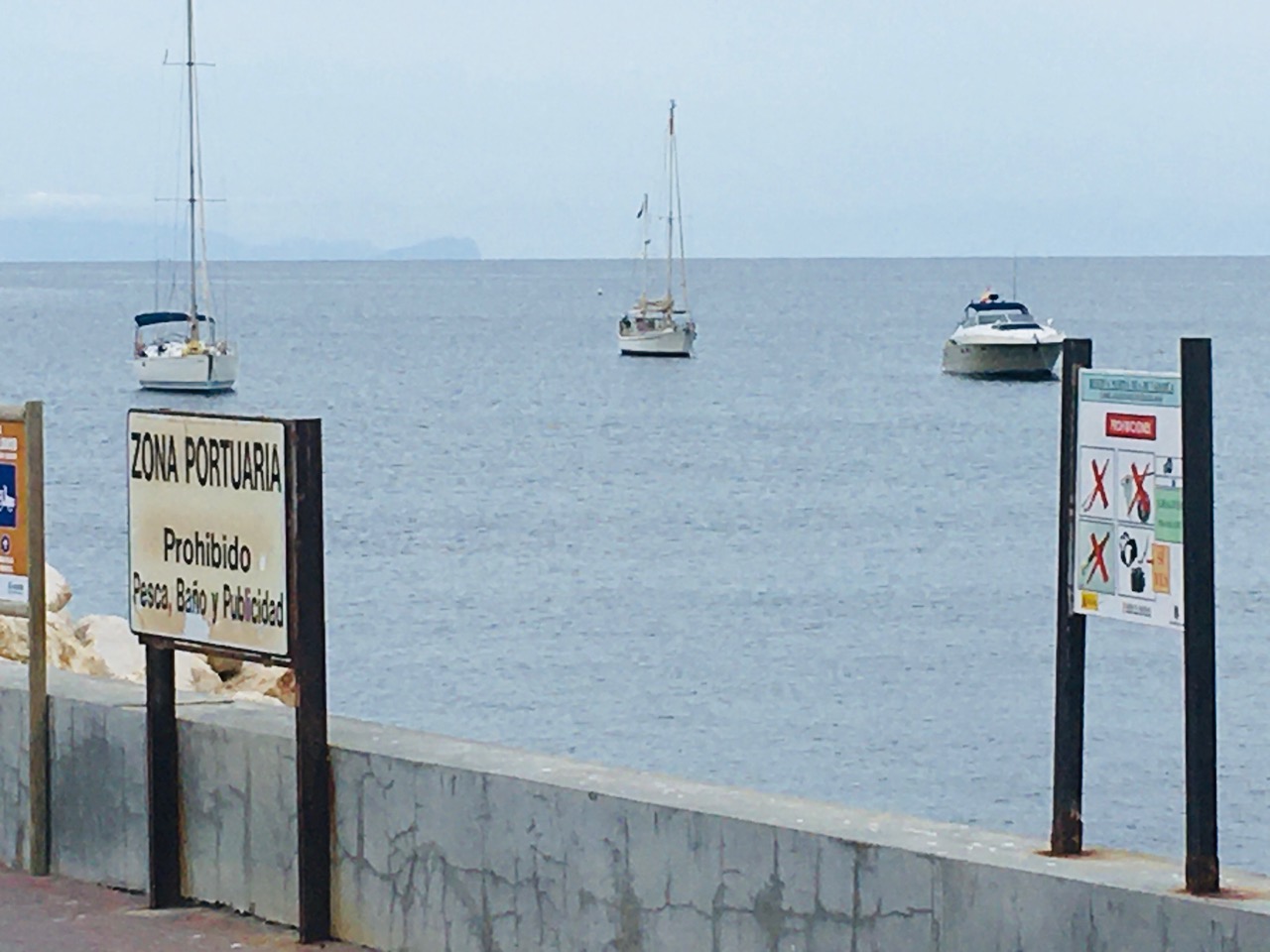 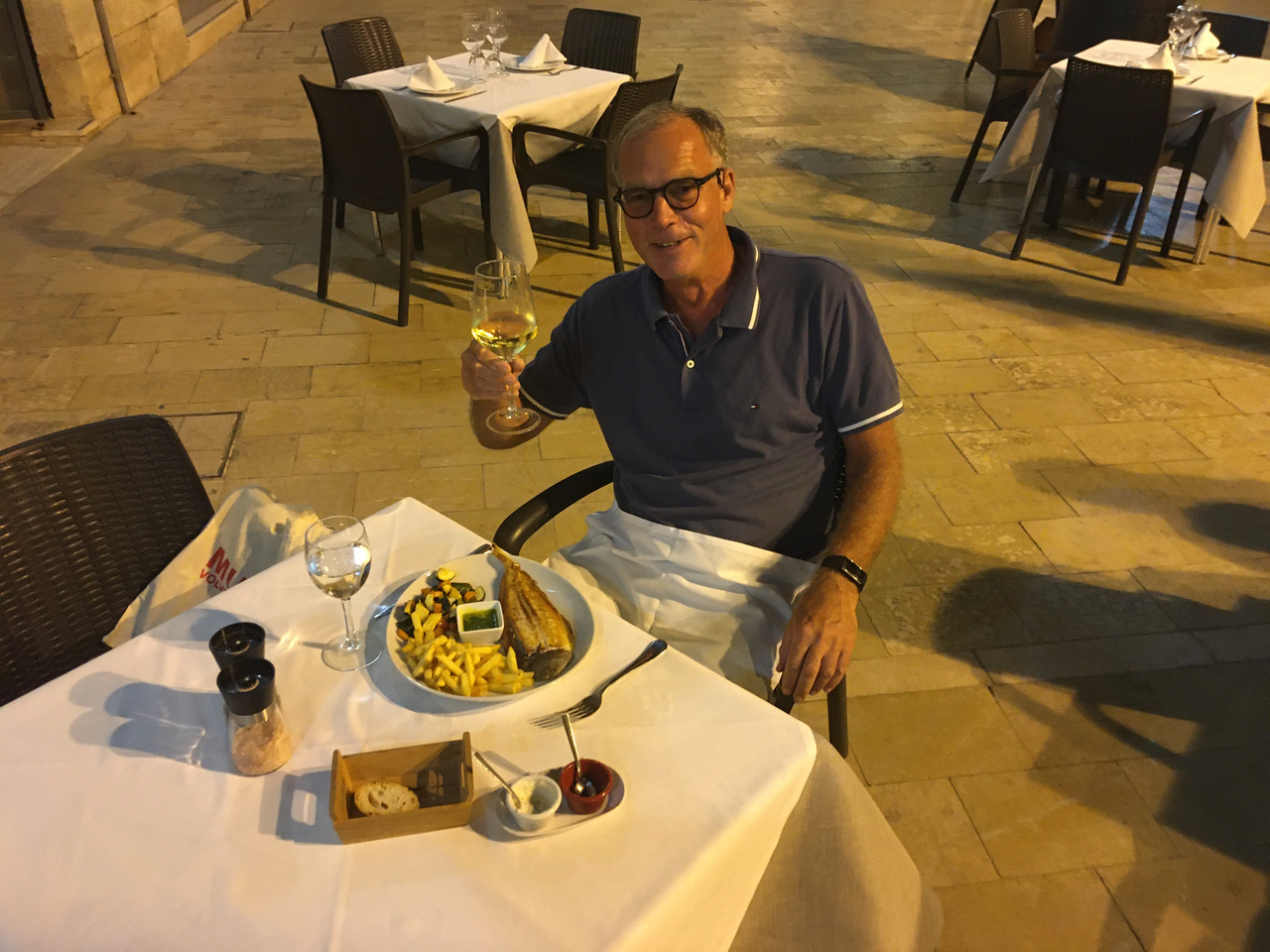 All together, they are three lovely weeks in quiet Spain. Before leaving, I put the winter coat back on the boat. The flight on 28 will most likely be cancelled as well. So, let’s hope that we will be back to smooth sailing next year. 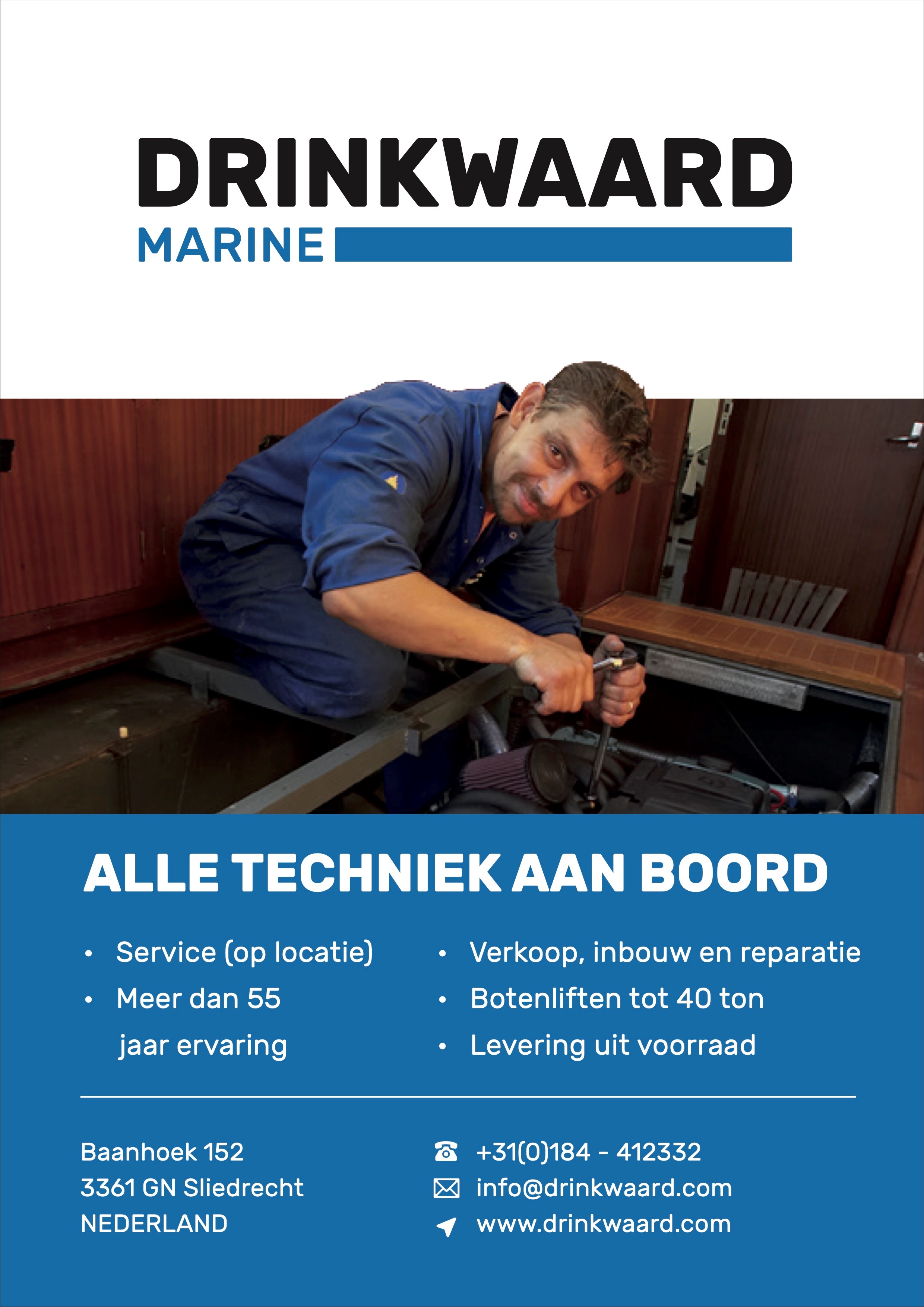