The Trintel- and Trintella yachts were built on shipyard Anne Wever in ‘s-Hertogenbosch. Anne started out as harbour-master of the marina in ‘s- Hertogenbosch, known as WSV Viking. Next to his job as harbour-master he started a small yachtservice and built a few boats on the side from 1952 onward. His father had taught him that the finish of ships was crucial. So Anne sought that perfection in the finish and his reputation grew. Through his network, he soon came into contact with Ricus van de Stadt, a known naval architect. He asked Wever to build for the export of Lightnings (small open sailing boat) in the United States. Anne accepted the request which kickstarted the collaboration between Anne and the famous architect. Due to the privatization of the Dutch watersports the market grew and the demand for small cabin yachts grew in response. Anne anticipated this growth with ready-made wooden cabin yachts as well as construction kits. The shipyard delivered many Junos, Pluisjes, Deltas and Junior Holidays. 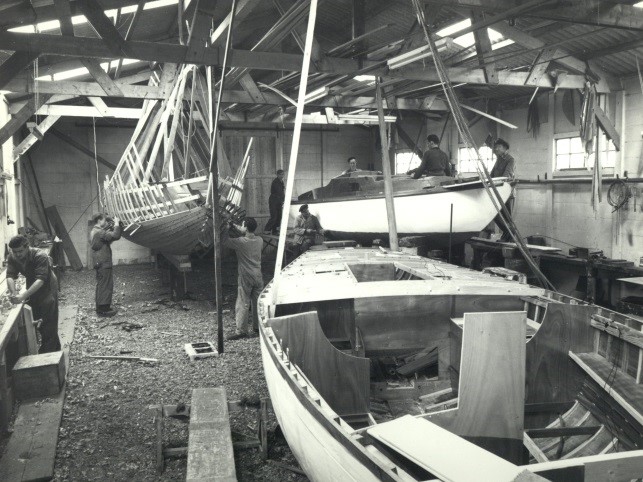 Sales in the US dropped in 1959. So Anne asked Van der Stadt if he could draw up a personal design for him. This became the steel Trintel I, named for a sandbank in the IJsselmeer. Anne had the hulls commissioned at other shipyards, i.e. Dekker in Amsterdam. Marken and Trewes were the two main competitors at the HISWA in the late 50s. Even though the Tintels were more expensive, Anne sold six ships and the competition only a few. The quality of the finish is what drew the customers to choose the Trintel.

Steel boat construction was an expensive endeavor, especially in larger numbers. The application of polyester for ship construction was introduced in the early 1960s. Designer Van de Stadt introduced the shipyard to Tyler in England who were busy building polyester hulls for construction yards on a large scale. Anne asked Van de Stadt to design a GRP version of the Trintel I. This became the Trintella I. The hulls for the first and new generation of Trintellas came from Tyler Mouldings Ltd. The shipyard in Den Bosch kept doing what it did best: building luxurious and reliable interiors using the best possible materials. Anne used the same mahogany build as the Trintel in the Trintella which helped maintain the traditional look. The Trintella I and Ia became Anne’s most successful models. In total more than 260 were built. 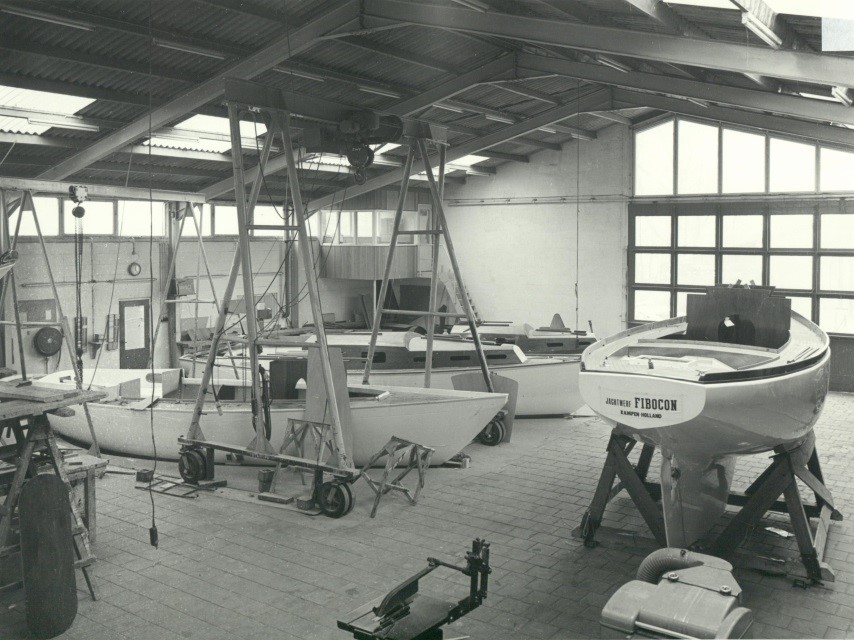 Building Trintella I and II yachts

The next model in the development of the series was the Trintella II, with a length of 9,5 meters and a wooden cabin as well. The hulls were once more produced by Tyler. To Anne’s astonishment, Tyler appeared to sell the hulls to other English shipyards as well. This brought on sudden and unexpected competition for the shipyard. Van de Stadt had a hand in the situation and met Anne halfway with a new design. This became the Trintella IIa, with an extended and narrower hull shape. The Trintella IIa paved the way for requests of larger and seaworthy touring yachts. These became known as Centre Cockpits. The series started with the Trintella III, followed by the IIIa, IV and V the characteristic models with a “poop” deck. The hulls were almost exclusively delivered by Tyler. However, the 1980s required a sleeker and more modern design. Van de Stadt designed the Flush Deck Series (model 38-53).

To answer the need for a faster design, the Trintella 42 was launched. It was introduced on the HISWA in 1980. The German Dieter Sieger ordered a 42 and asked if he could produce his own design for the interior. He brought striking round shapes that would later be used as the starting point for many other Trintella 42 yachts. 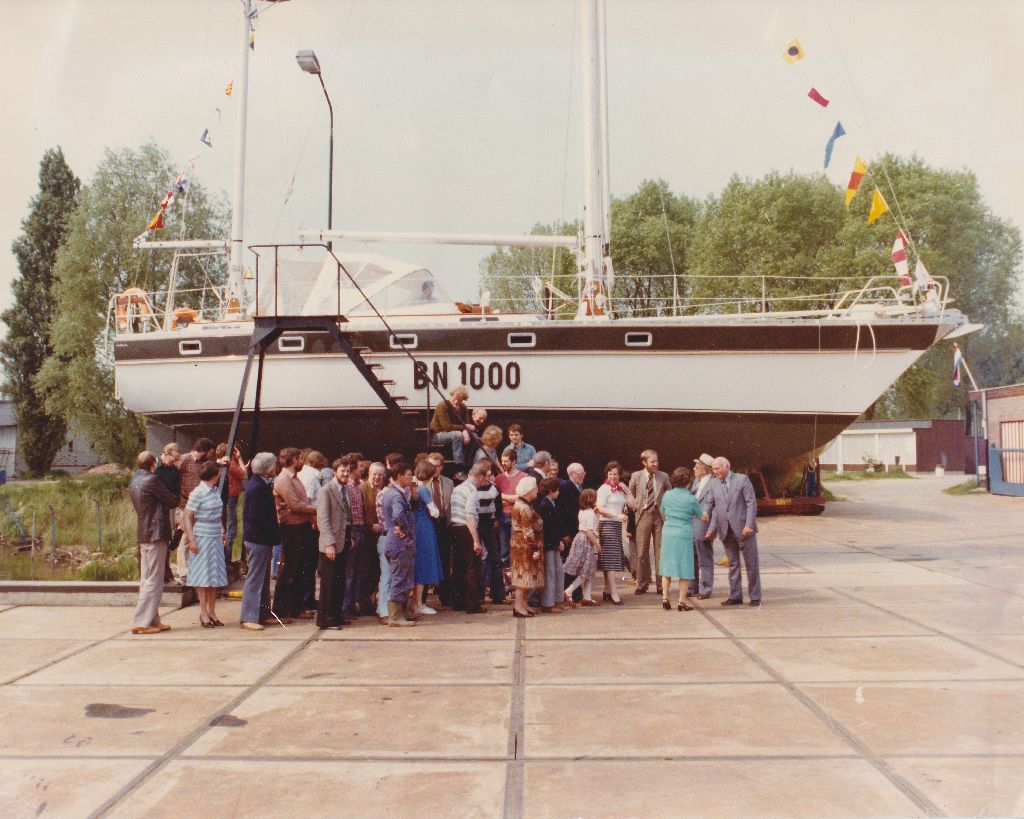 In the year 1978, the 1000th Trintella 44 was produced. This was reason to celebrate. People could not foresee that a period of recession would hit only a couple of years later in 1980. It would hit the market for luxury touring yachts hard. The reserve rapidly depleted. Anne had to fire 40 people but was able to rehire some of them within the same year fortunately. The shipyard was at a turning point and had to be reset. Market research offered an answer. The conclusion of the research was that there was a need for a ship with a doghouse. The market reported a preference to aluminum rather than polyester. The reason for that were market stories about osmoses in the polyester ships. The research led to the Trintella 44A, and the aluminum A series ignited the export to the US and the shipyard bloomed.

In the middle of the 1980s, Anne became more serious about succession. It was not an easy period. In 1987 Mr van Eijnsbergen takes over the shipyard and a new period with a different vision on the manufacturing and marketing of luxury sailing yachts dawns. Other yacht architects were hired to build faster designs. A design by P. Behage, the Trintella 448S, remained a one-off. They decided to expand the A series by realizing a 75-footer in 1993. It is the largest Trintella. The high-end international luxury yacht manufacturing proved to risky that it crushed the shipyard. They declared bankruptcy in July 1993. 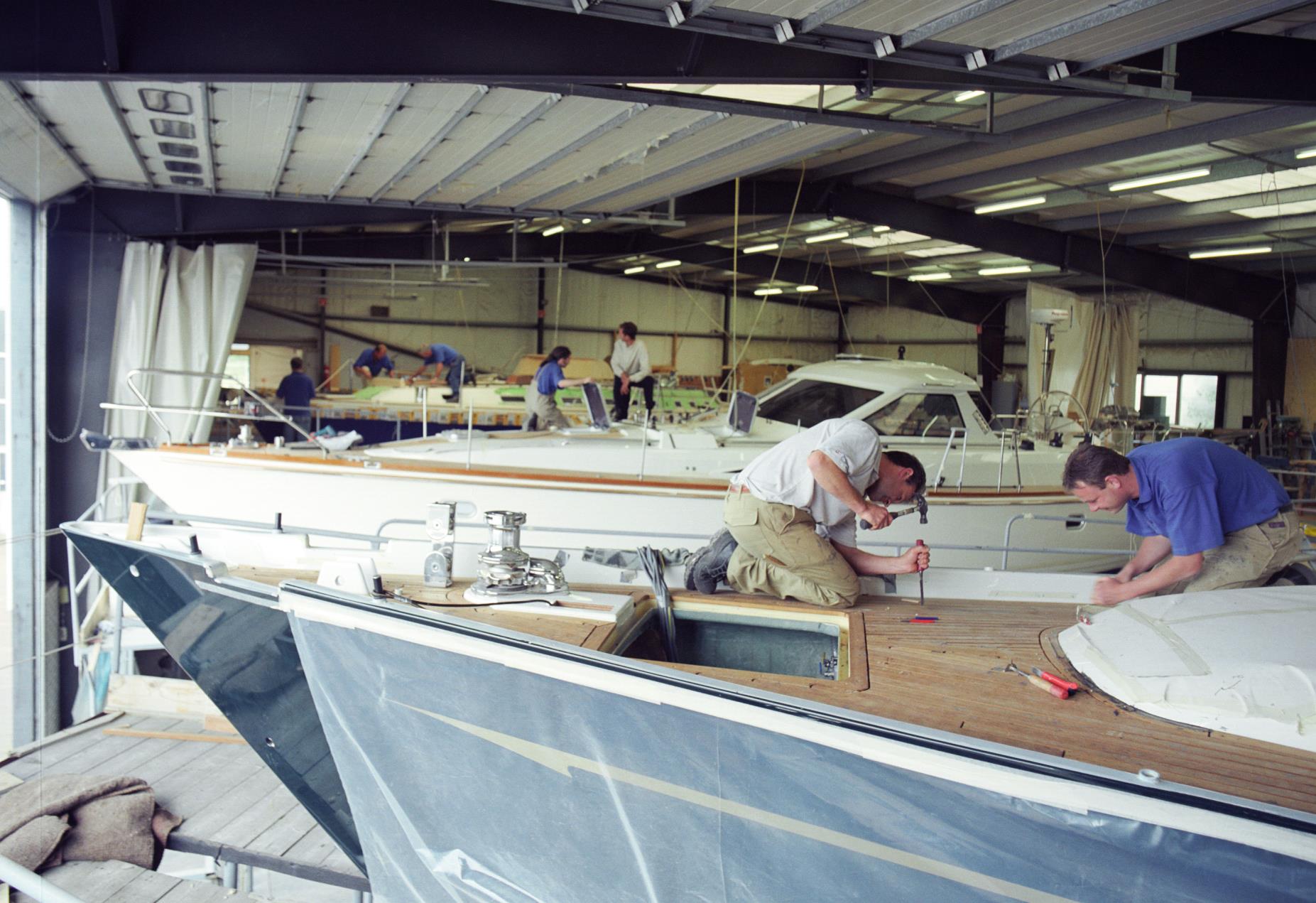 The shipyard was able to restart within three months. The Irishman Les Auchincloss had purchased a 57A a few years prior and was familiar with the craftmanship and quality of the shipyard. Keeping the designs of the A series in the back of his mind, he asked famous yacht architect Ron Holland to draw up a modified line of models. The Trintella C series came to life constructed in modern composite rather than aluminum. The shipyard wanted to attract a new target group in the US with these models. More than 10 ships from the Trintella C series were realized. The shipyard kept struggling to maintain a steady course. After several unprofitable projects, the curtain finally fell for Trintella Shipyard B.V. in December 2002.

At the start of 2003, the English wharf Hamble Yacht Service (HYS) showed an interest in finishing some projects and take over the trade mark rights. Unfortunately, when HYS was taken over by another yard the Trintella brand disappeared from the radar.

Having spent a number of years in Italian ownership, the trade mark rights finally returned to a Dutch shipyard in 2017. They intend to once again market beautiful exclusive yachts in honor of Anne Wever. The Trintella brand has come full circle.