The Spring Meeting in Andijk and Enkhuizen was a great success. As per usual, one of the participants of the meeting has penned down their personal report of the weekend. This time around it means two participants, the full crew of a Trintella Ia named WAd 2.0: Wouter Ernst and Ad Kamsma. Here is their story!

At this very moment – the weekend of Pentecost – the Wad 2.0 is in the harbour of West-Terschelling. The traffic centre Brandaris just called winds of Beaufort force 8, even 9. That makes this the perfect moment for both owners, Wouter and Ad, to finish their report of the latest Trintella Vriendenkring Spring Meeting.

It was the 51th Spring Meeting of our association, and this year we were guests in Andijk and Enkhuizen. Organisers Yvo and Ines Bakkum find the berth of their Trintella Ia, called Windveer, in Andijk, which made it familiar terrain for them. For us, however, it was a yet unknown port, that could be reached easily from Friesland – our boat is docked in Sneek. With our Wad 2.0, crossing the Ijsselmeer is no longer a day trip as it was with our previous, steel cabin sailboat, but only a matter of hours.

The outward journey from Stavoren to Andijk is south-south-west, and so was the wind that day! So, after a good windward leg, we arrived in the Andijk harbour just after 17:00. Yvo and Ines were already present and the first activity awaited us right after we docked: an interesting presentation by the Dutch sea rescue institution Koninklijke Nederlandse Redding Maatschappij (or: KNRM), made even more enjoyable by a locally brewed bitter called Andijker Juttersbitter. It was, to our surprise, as delicious as our own favourite, the Schylger Juttersbitter – from the Wadden, of course. 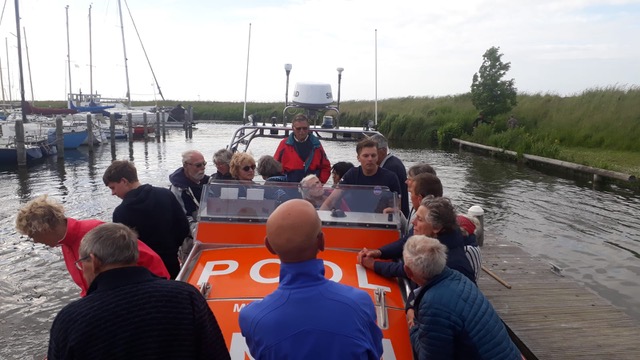 This put us in the mood for the next item on the agenda: the barbeque. A part of a large shipyard was turned into a party venue. While enjoying drinks and food, it was the first opportunity to catch up with other TVK members. We also had some musical entertainment, from several singing shipwrights, who had their craftmanship on display there well. Then, well-fed and slightly tipsy, it was time for our first overnight stay. 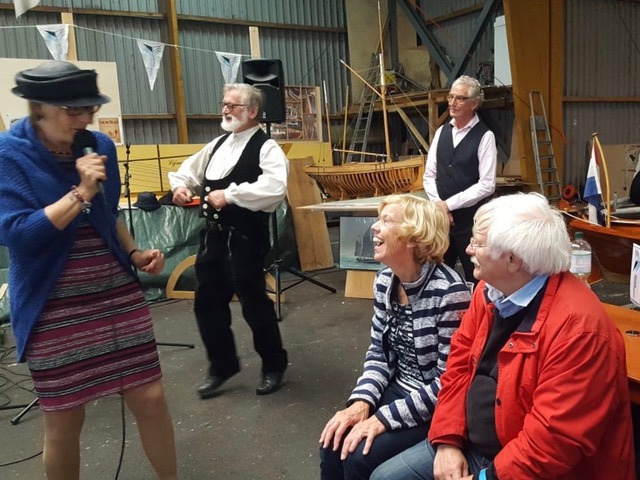 The next morning at 10:00, after a breakfast with freshly baked bread, it was time for the palaver before the regatta. Underneath the crane, all contestants were breathlessly listening to Bert’s instructions. After everyone had set sail and was trying their hardest to cross the start line at the supreme moment, the starting shot sounded at 12:00. There was no windward leg due to the direction of the wind, so the challenge was to trim perfectly to get to our maximum speed. We ended up reaching hull speed several times and were slowed down by our own wake. Yet everyone was a at top speed this time, so it was an exciting race. Had we been foolish by not gybing at the start? Only time would tell… 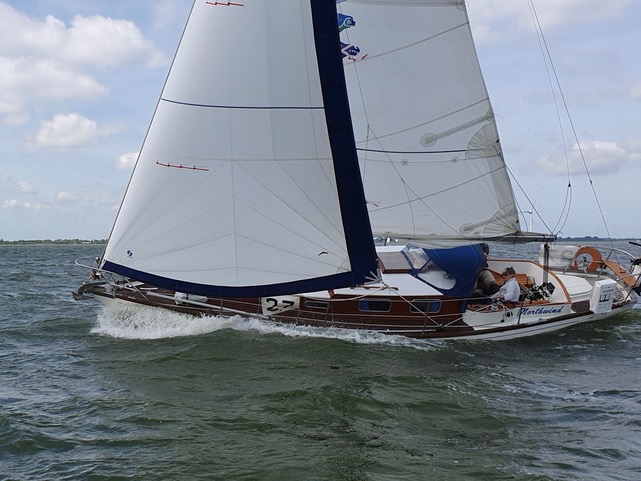 After finishing the regatta, we still had a trip to go from Andijk to Enkhuizen. From the first moment, we had the wind straight from behind, and later we sailed into the inner harbour of Enkhuizen at half wind, on full hull speed. Delightful! We were again given a warm welcome in Enkhuizen and all Trintellas Ia were all given nice anchorage together. Unfortunately, we had to pass on the concert at the Westerkerk, but the spareribs at restaurant Dikke Mik were very good as well. 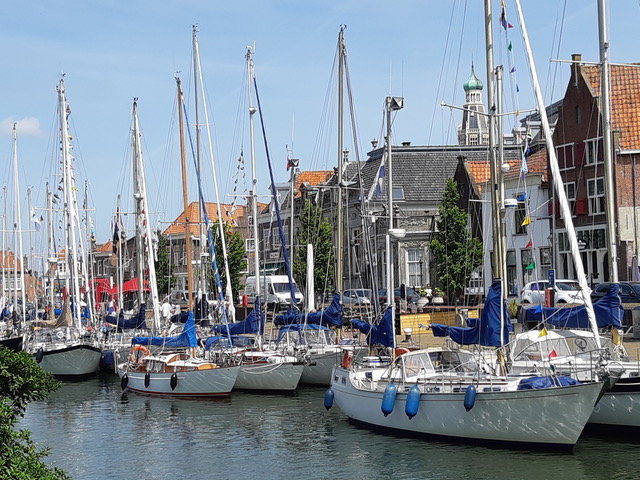 Our boats stayed docked on Saturday. The day got off to a relaxed start with the famous Concours de Creativité. (Simultaneously, while the participants enjoyed a cup of coffee, the Concours de Historique took place at hotel Die Port van Cleve. With old documents and footage on Trintella and the participants’ best memories, it was a great morning. At least, we assume, since we were not there…) 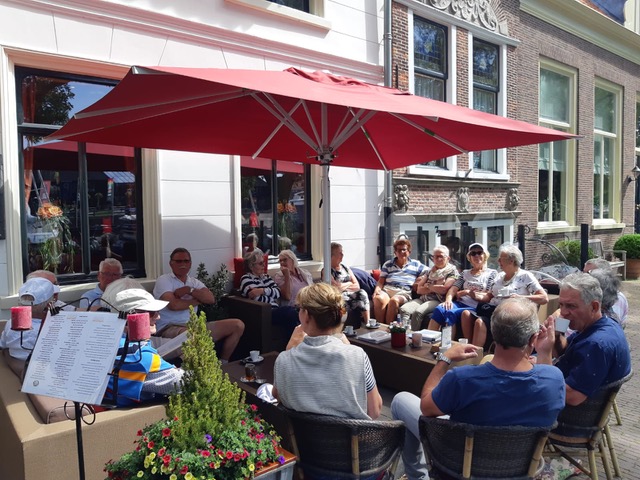 The Concours de Creativité is all about innovative solutions and making life aboard a little easier. The participants were divided into three groups: the Classics, the Centre Cockpits, and the other boats. We were in the Classics category, together with other Trintels and Trintellas Ia and IIa. Because they are Classics, much has been invented since the first launch to improve upon the practicality of the ship. We were very curious, especially because we ourselves could think of a few things that would make life a little easier. Ernst, inspired by Anja’s ideas, had improved a great deal of things on their boat, the Black River: not just the coffee holder and the benches were admired, but the fridge as well. It is fair that they received first price in our Classics category. The competition element aside, it was very interesting to sneak a peek in similar boats, and hearing the owners speak of their innovations. The enthusiasm was great, as can be seen on the picture where we look into the cabin from the bow – a very deep look, as we were talking about the keel. 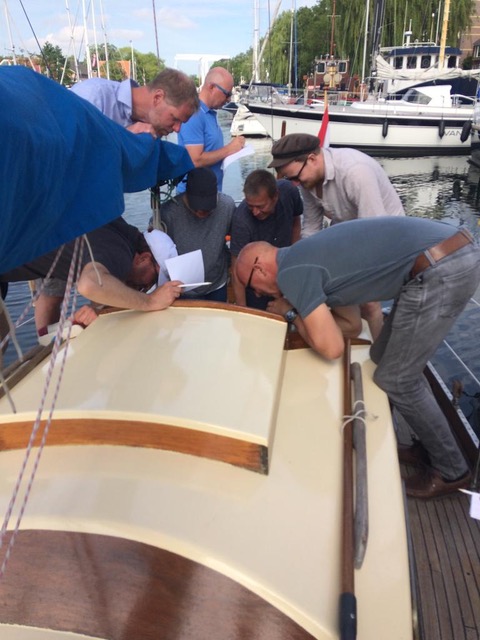 That afternoon we could choose between a city tour in Enkhuizen or visiting ‘t Harpje, a demolisher of ships, and shipyard Ventis. Our interest was piqued by ’t Harpje. With a shuttle boat from the Zuiderzeemuseum, we were dropped off very close to the demolisher. Owner Bram van der Pijll welcomed us, and started an introduction filled with shocking numbers and statistics on how many boats are wasting away – it seems that his work will be a sure shot for the upcoming years. Bram’s aspiration is to have his demolishing as high in the waste hierarchy as possible. This means reusing and recycling as much as possible and dumping or burning equally as little. Especially the new application of old polyester, which has been developed after many years of research and collaboration with the college Hogeschool Windesheim, appealed to our imagination. After Bram crushed a boat with his crane, we could get hands on ourselves, and tried sorting as many reusable parts as we could. 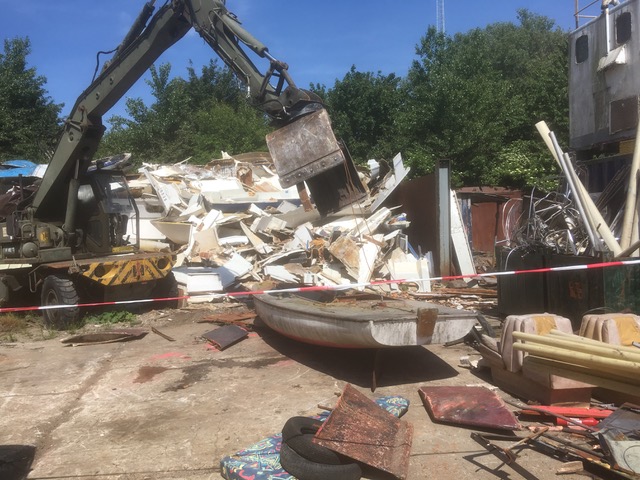 Because we had already visited Ventis before, through the Federation Poly Classics, we took the shuttle boat back to the Zuiderzeemuseum – a real recommendation! After half five, we were welcome at restaurant MEER Enkhuizen for drinks and dinner, and, of course, the award ceremony! Our suspicions were true: we had not been able to beat Ernst and Anja with their iron Trintel. After taking handicaps into account, they even got in first place overall. 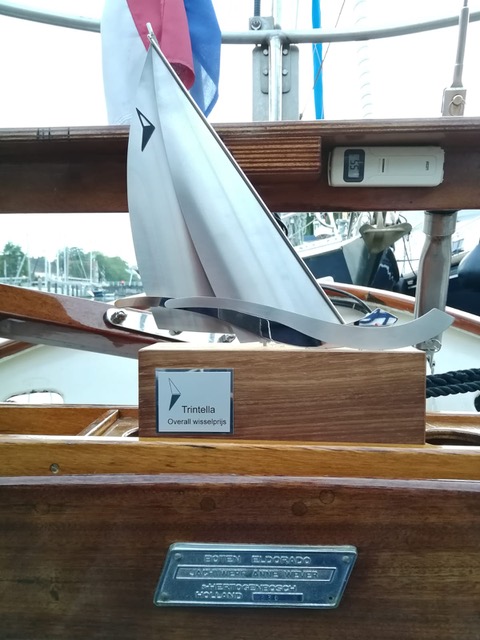 An amazing achievement for a Classic! (Yet it is ironic that we introduced our own competition to the TVK. We should have been gybing all along! Haha.) Congratulations are also in order for the crew of Double Dutch and Sangha, and to all other award winners (*). Well done to you!

Sadly, the next day, Sunday, the Spring Meeting came to an end. Leaving on our own time, and with almost no wind – so loads of insects – back across the Ijsselmeer, to Stavoren. Luckily, wind picked up when we were back in Friesland, so we could sail all the way back to Sneek from there, while thinking back on a wonderful weekend. Thank you very much, organisers!